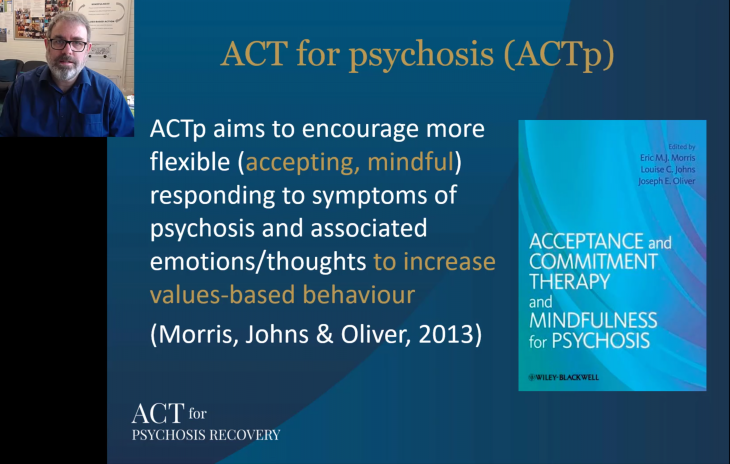 Our team had the fortunate opportunity to present a paper at the ABCT 54th Annual Convention on group ACT for people with psychosis.

Thanks to Dr Lyn Ellett from Royal Holloway University of London for organising the symposium on “Mindfulness and Acceptance Based Approaches for Psychosis: Current Evidence and Future Directions” where I presented the paper. It is terrific to be able to share about developments in mindfulness based interventions for people with psychosis at the ABCT Convention.

Here is a recorded version of our presentation:

This research is being conducted in Melbourne in public mental health services (a collaboration between La Trobe University and NorthWestern Mental Health), and our focus has been on adapting ACT to be useful in supporting the recovery of people with psychosis. This builds upon treatment developments that originated in the UK National Health Service (here is a recent paper). (for a background on ACT for Psychosis, check out this webinar recording)

Recovery ACT: Feasibility and Acceptability of Group Acceptance and Commitment Therapy for People with Psychosis

This paper presents results of a mixed-methods, uncontrolled, single-group prospective cohort design to test feasibility, acceptability and pilot effectiveness of Group ACT for Australian mental health services. The Recovery ACT 8-session group program was adapted from the protocol described by O’Donoghue et al (2018), using principles outlined by Butler et al (2015), and previously evaluated in the National Health Service in the United Kingdom. We hypothesized the intervention would be feasible and acceptable, and group engagement would increase participants’ psychological flexibility (measured by increased cognitive defusion, acceptance, mindfulness and connection with personal values). These changes were hypothesized to lead to improvements in participants’ wellbeing and personal recovery. Of those invited to participate (N = 96), 90 participants consented, with 58.9% attending three or more sessions and 41.1% withdrawing (i.e., attending two or fewer sessions). Participants who withdrew provided reasons including anxiety about group attendance, and deterioration of mental state (to our knowledge, unrelated to the intervention). No adverse events were reported. A majority of participants who engaged in group sessions completed post-measures (N = 48, 90.6%). Recovery ACT was found to be feasible and acceptable (based on participant ratings and qualitative interviews). Participants who engaged in groups experienced on average a significant increase in wellbeing and sense of personal recovery. Improvements were accompanied by increases in mindfulness and valued actions; there were no changes in cognitive defusion or acceptance. The linear combination of process measures was significantly related to change in wellbeing; however, no  partial correlations between process measures and wellbeing were significant. These findings inform a pragmatic randomised controlled trial currently being conducted across multiple health services in Melbourne, Australia.