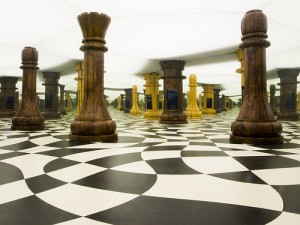 The infinite chessboard… a hierarchical Self as Observer?

Last Friday I was fortunate to hear Louise McHugh speak at UCL about the bottom-up approach of Relational Frame Theory (RFT) to understanding mindfulness and the self. Louise’s excellent talk, hosted by the BABCP ACT Special Interest Group, demonstrated how the contextual behavioural science approach is making progress in identifying the building blocks for skills such as empathy, sense of self, mindfulness, and compassion.

Here is the description of Louise’s talk:

The self is a concept that is widespread in modern psychology and has played either a central or supporting explanatory role in several major theoretical approaches to human behaviour including psychodynamics, humanism and positive psychology. Despite the popularity of ‘self’ as an explanatory concept within these approaches, however, it has arguably remained ill-defined in operational terms. Recently, however, a strand of behavioural psychology, namely Contextual Behavioural Science (CBS), has emerged that has begun to provide an account of human language and cognition characterised by precision, scope and depth. From this perspective only humans have a sense of self. This is because only humans have language. In order to have a sense of self, a creature must be a language-user and only humans are language users. So what is language and what does it mean to be a language user? The current talk will address these questions and demonstrate to the audience why the CBS approach to the self has important implications for training socially important skills such as perspective taking, self compassion and mindfulness.

Promising associations have been found, and outcomes shown from training in perspective taking informed by RFT (for examples, check out McHugh et al, 2004; Weil et al, 2011; Villatte et al., 2010). Clinically-relevant questions have also been investigated – such as whether distress is reduced more by training the observation of thoughts from a perspective of self-distinction from the experience (“You are not your thoughts”), or in a hierarchical relation with the experience (“You are the container of your thoughts”) – Foody et al (2013) found that hierarchical relating was  superior at reducing distress (so keep using those Chessboard and Sky and Weather metaphors) .

This talk reinforced my view that CBS will head in the direction of “Clinical RFT”, where therapists and trainers fluent in how relational responding is elaborated and functions are transformed will be able to develop interventions with greater precision and impact, rather than relying on the mid-level terms of the psychological flexibility model (ACT Hexaflex). I had similar thoughts when Matt Villatte visited London in 2013 to lead a very accessible RFT-based therapist skills training workshop (co-developed with Jennifer Villatte; look out for the forthcoming book from Guilford Press, The Language of Psychotherapy: Strengthening Clinical Practice with Relational Frame Theory).

In the near future clinical practice will be informed by a number of lab-based procedures to develop perspective-taking. This will be interesting because many of the classic ACT exercises have been taken from other sources, while RFT-based procedures will be distinctive methods, existing because of these empirical developments. Of course, due to the focus on function in CBS, there will continue to be methods taken from elsewhere (such as mindfulness), used for the purpose of promoting flexible responding.

The audio recording of the talk is available from here. And the slides are here(PDF). The two-hour presentation includes Louise leading several perspective-taking exercises and encouraging the audience to provide feedback. Well worth a listen!   [NB there is feedback from yours truly; the event was the last London ACT Networking Event I hosted for the BABCP]